Blogging while on vacation shows perseverance.   And perseverance drives results.  This is an important precept in an effective job search.  But after a while, many of us start to flounder. 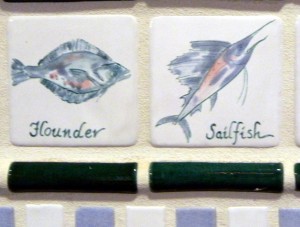 During my current travels, I was struck by the contrast of these two different fish, as depicted on custom wall tiles.  The meaning of the noun, flounder, refers to the fish.  However, it is the verb meaning that gave me concern.  Two formal definitions are given, when I query Merriam-Webster.com:

When I began my recent job search, I found that I sometimes acted clumsily and ineffectually, struggling to get proper footing.  It was only after I learned that the internet age had changed the rules, did I begin to make some headway.

Only after a realized the value of networking in the search, did I actually begin move ahead, and upward — much like the sailfish on the corresponding  tile.  In fact, the sailfish is much more active, and feisty!  It can be seen jumping out of the water, displaying its true splendor for all to see. 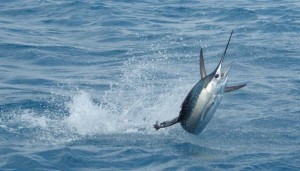 One can learn a lesson from the sailfish, and apply it to the art of informational interviewing — a more outgoing form of networking.  In an informational interview, the job seeker reaches out to key people from whom good things can be gained — insights about an industry or company, new skills or trends that should be explored, and most importantly, referrals.

But just as the sailfish, you must display your splendor, in the form of success stories.  Think of these as those events in your past jobs that you’re most proud of, and those which you’d like to show to others when you have the opportunity to “leap out of the water”, and stop floundering.

Consider your most impacting success story that, when shared with others, your eyes would widen and your face would light up.  Now, try to think of three to six more of those that make you similarly proud.

How many stories were you able to muster?  Which one would you consider your most effective?

Editor’s note: KJ is currently in Florida with his family, but continues to blog for his LeggUpp readers.