At a recent presentation, the group was asked “Who really loves to network?” Although a few hands went up, the vast majority of attendees recorded their votes by remaining silent. So, it appeared to me that most people’s disdain for the art of networking may rank not too far beneath that of public speaking. Therefore, it would be folly to strongly encourage new job searchers to network, network, network.

Just like when dealing with a swimming pool full of wicked cold water on a hot summer day, there are some who will dive right in. Others would prefer to wade in slowly, gradually adjusting to the drastic temperature difference. In my opinion, the divers equate to those who raised their hands to signify their love of networking. 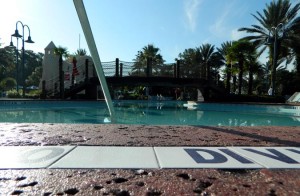 Though I personally have grown to enjoy networking, I continue to wade into a pool when the water seems a tad cool. For me, networking is really just being friendly and personable, but with maybe a bit more focus.

To give an example, just the other day, I was with my family, eating at a favorite soup & salad restaurant. Later, I returned for a take-out item, and chatted with the cashier, who served us earlier.

During our impromptu conversation, I learned some things — that she followed her fiancé down to Florida, that he was a year or two older than she was, that he has a good job working in accounting and administration in a local college, and the cashier position was one of her two jobs, the other being with the mega-entertainment company that dominates in the area. Plus, she indicated that she relocated from the same state and county up north that I live in. 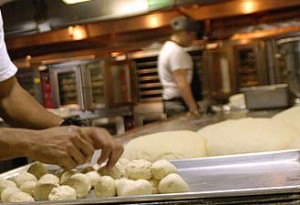 If I were looking for employment in this area, I could say that I just made a solid connection in just a brief few minutes, all while waiting for my delicious multi-grain bread to finish baking, which was my intended mission in the first place.

Then, I could probably speak to her further about prospects in the entertainment company, including whether they’re hiring.  I could similarly ask about the college, and hope that she would consider connecting me with her fiancé, to further explore that possibility instead. This all resulted from my just being friendly and personable at the end of a salad bar, and perhaps willing to inquire further and ask a follow-up question or two, such as about her fiancé’s work in the area. 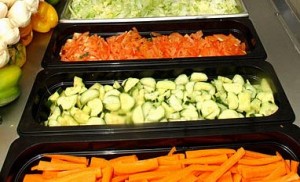 Wouldn’t you say that the above results amounted from little more than a “wade”, by carrying on an easy conversation with someone who chats with customers all day long?

Had I truly been interested in learning more about opportunities in the area, connecting with new and helpful people, etc., I would have made a point to carry some personal business cards along with me wherever I traveled. This would allow me to easily share my information, both contact info and other takeaways that I want the recipient to know about me.

If you don’t already have a personal business card, please get one right away. On-line vendors offer professional-looking cards for reasonable prices.

Besides your name and contact information, what additional key points would you want someone to remember about you?  How could you present this information on a personal business card, to not only make you more memorable, but also to help you to stand out from your competition in the job search?

Editor’s note: KJ is currently in Florida with his family, but continues to blog for his LeggUpp readers.